My interest in the Sophia Pate started when I found the Wilkinson Family Bible while doing my family tree, it told of a story of shattered dreams, death in a far away country and disquieting images of theft and maybe murder.
My Grand mother on my father’s side of the family was a Wilkinson
Where these stories true or had the family changed them to put a better light on themselves and discredit others I wanted to learn the true story
The following document is a copy of the Family Bible and the Extract that started me on my quest for the truth
To look at a Transcription of the Family Bible  go to
http://sophiapatenz.blogspot.com.au/p/family-bible.html 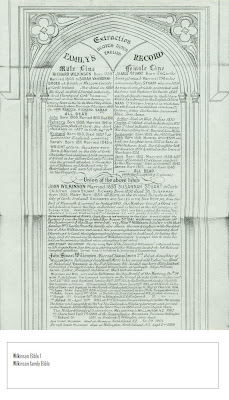 Extract from the  above family Bible
“Emigrated and sailed in the ship “ Neptune” from the Port of Plymouth and arrived in Sydney 1841 the mother burst a blood vessel and died on board the ship in harbour and is buried in the old Cemetery at Sydney NSW immigrated to New Zealand 1841 in the brig called the “Sophia Pate” chartered Wilkinson and Co at Kaipara NZ with goods and cattle in order to form a settlement at Kiheu
Captain Harrison not waiting for the pilot tried to enter the harbour and ran the ship on a Sand bar August 31st 1841 With one exception all the passengers of the ship were lost “
“The crew and captain with the eldest son of John Wilkinson were thru possessing themselves of the remaining Boat and thereby got to land .The captain was tried and imprisoned in Auckland for losing the ship and smashing the hands of Wilkinson senior to compel him to leave his hold on the gunwale of the boat when attempting to get into it. “

To look at a Transcription of the Bible fly leaf  and some other notes on this go to
http://sophiapatenz.blogspot.com.au/p/bible-fly-leaf.html 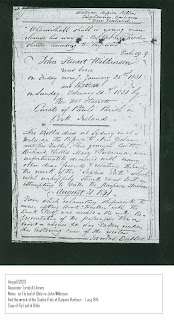 The Story started sometime in 1838 when James Salter a Limerick Jeweller proposed to 3 friends John Wilkinson a shoemaker, George Stannard a cabinet maker and Charles Stuart (Stewart) the cousin of Salter and brother in law of John Wilkinson that they form a group and establish a settlement in one of the new British Colonies
James and Sarah Salter had a large family of 10 children. There Gold and Silversmith business was at 34 Grand Parade Cork and for many year they also resided on the Grand Parade

For extra information on James Salter go to
http://sophiapatenz.blogspot.com.au/p/james-salter.html
John Stuart Wilkinson was born between 1804 and 1806 in Cork Ireland and his wife Susannah nee Stuart born somewhere between 1805 and 1809 They were married in 1830 and ran a Boot and Shoe warehouse they had 4 children John Stuart, Richard, Susannah and Mary The family lived in Daunts Square

The group were devout Wesleyans who would start the settlement and by mutual co-operation find the means of starting a domestic, social and religious community in the expectation of being shortly followed by several more like-minded families
Salter the leader of the group discussed the scheme with his Methodist friend Dr Richard Day a doctor in Cork who was about to sail for Sydney in the ship Coromandel and requested him to look for a suitable location for there planned settlement. Day eventually visited New Zealand as a passenger calling at Hokianga for 3 month to load a cargo of spars
during which time the Doctor resided at Mangungu, Accompanied by the Reverend N Turner, then Chairman of the Wesleyan Mission he proceeded to Kaipara and located a fine piece of land in the Kaihu valley, held by the Native Chief Parore who was desirous that the group establish themselves in his valley. On the 7 March 1839 with the help from Mr Turner Doctor Day paid Parore a deposit on a 1000 acre tract of land in the Kaihu Valley on behalf of the group
The sale agreement provided that the intending settlers would arrive at Kaihu within 2 years and pay the remaining consideration
Day left New Zealand mid March and on his return to Ireland on 1 September 1840 assigned the land purchase to the group reserving an 8th part for himself The Kaihu Settlement scheme was born
The boundaries of the piece of land the group purchased off Parore as written on the Indenture dated 1st September 1840 is as followed
“Commencing at the mouth of the Awakino Creek and proceeding along the Wairoa River to the mouth of the Kaihu river thence along the middle of the said river to Taupaki thence in a direct line to Waiupukura thence along the Tupihau to the water Komariere from thence in a straight line to the Awatotara there crossing the Kaihu steam and proceeding to the left side of Pukawariki straight down into the upper part of the Awakino thence along the Awakinos until it falls into the Wairoa “

The Full consideration for the block was $700 of which $360 had been paid to Parore according to FD Bell’s July 1862 schedule. James Salter advised that in addition to the $700 there were considerable other expenses such as transport to New Zealand, cattle, implements ect and procuring a location for a residence of a medical gentleman, in this case Dr Richard Day

Payment for the said land also written on the Indenture

To look at a transcribed copy of the  indenture go to

On his return to Cork, Day advised the group of his purchase and the conditions attached there to The parties (Wilkinson, Stannard, Salter & Day) began the necessary preparation for proceeding to New Zealand and as they were all extensively engaged in business rather more than twelve months elapsed before these preparations were completed.
Prior to leaving Cork, they learnt that New Zealand had been declared a British colony and became aware of the restrictions being placed on the purchase of land there. In light of this development a letter was sent to the Marquis of Normanby, the then Colonial Secretary stating the circumstances of their land purchase and as the welfare of a number of respectable families were involved, they requested to know if any objection would be made or contemplated which would damage their claim. They received a letter enclosing a copy of instructions to Captain Hobson and a general assurance that if the purchase had been equitably made and a valuable consideration given the claim would be recognised by the Crown. Conscious that this had been dealt with and that they had nothing to fear and fully relying on the good faith of the British Statesman, they proceeded with their plans to shift to New Zealand.
Capt Hobson bought in the law, basically banning the sale of land and what was sold or in the process of being sold had to be ratified by the Crown This was to protect the Maoris who were being done like a dogs dinner. Was reading all the claims 32,000 acres sold for £160. 70,000 acres sold for £673.
Strange how the indenture refers to the land being purchased as 1000 acres and yet when the Crown took over the same Kaihu Block it was 18000 acres. Do I think Doctor Day did a shifty on Parore??? Mind you they probably guessed anyway.",Hey Chief lets just call it 1000 acres." Parore wouldn’t have known what an acre was The block was un surveyed and just by looking at it how do you tell how big it is but in saying that Day would properly known that it looked bigger than 1000 acres
Even on the land claim documents held at Archives NZ some clerk has written on them this is more like 10,000 acres
The group completed their emigration arrangements and in late November the 4 businessmen closed their respective establishments and left Cork Ireland and sailed to Sydney Australia via Port Phillip in the Ship” Neptune’’ on the 1st stage of their long journey to Kaipara New Zealand
The Group were
James Salter and Mrs Salter a respectable jeweller and their 10 children, who resided for many years in the Grand Parade Total 12
Mr and Mrs Wilkinson and their 4 children, boot and shoe maker, of Daunt's Square Total 6

Mr and Mrs Stuart (Stewart ) and their 2 children Total 4

Mr and Mrs Stannard a of Hammonds Marsh, we believe a cabinetmaker Total 2
and Stephen Ellis a servant Total 25 in all
The shipping list for the “Neptune” shows a family of Ellis’s also came on the voyage from Ireland but just looking at ages of the other family probably cousins but have not checked this. Also Richard Day MD Said in a letter that the party consisted of 25 individuals including servants and children so Stephen Ellis was by himself
25 people said to be in the group but James Salter only had 8 children making the group 23 and finally James Salter was a solo father Miss Salter was his sister not his wife
23
this is the number of people I think are in the group at this stage in there voyage to New Zealand